We pushed the limits this weekend with the full PA, 7 led parcans and a whole stage’s worth of equipment powered from 6 bikes at the Acoustic festival of britain in Uttoxeter. A whole range of bands played in the huge (50meter x 60meter) 3500 capacity Big top real ale tent including Hazel O’Conner, sicknote Steve, and many more great acts. We got loads of great compliments on the quality of the sound on stage and in the audience. Unfortunately on the Sunday the big top ale tent we were in was taken down because of high winds! (mad dash to get the sound system out before the thing came down!)

Overall it was a great success. we managed to cover up to 2000 people in a 60x50meter big top with 7 led par cans and all the band equipment with all the power coming from just 6 bike generators! Now that’s efficiency!!

I think we could improve on our signage as many of the audience did not grasp the idea that the bikes provided all of the power for the stage. I think maybe because it works so well it is hard to believe!!

Here are some photos: 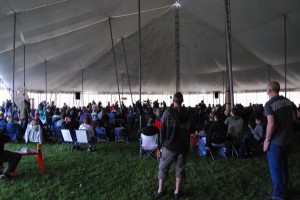 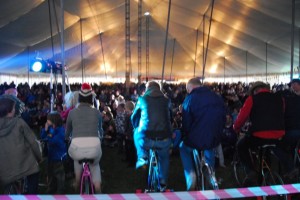